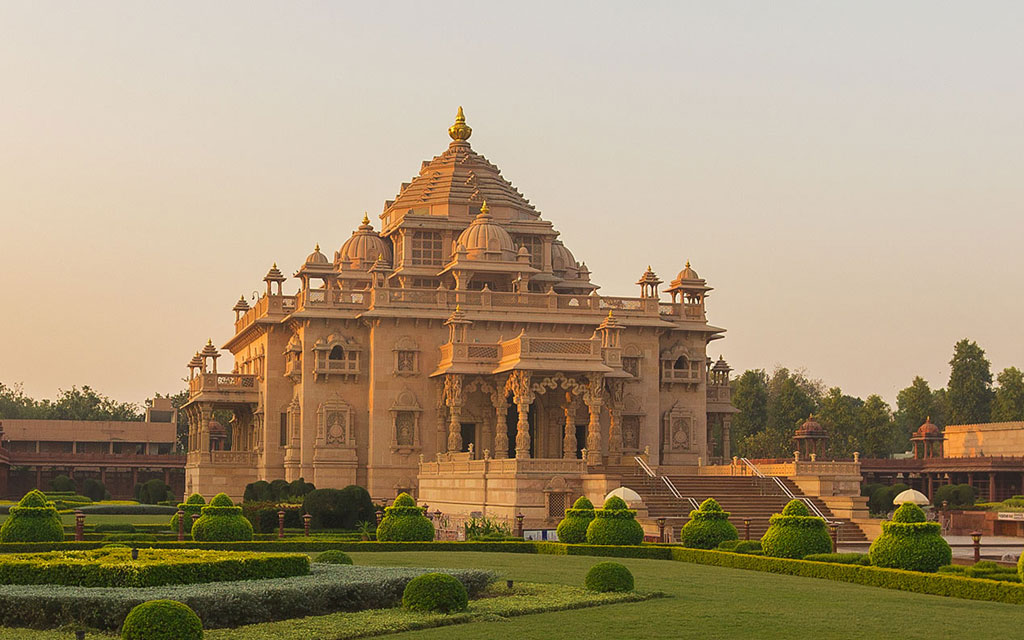 Ahmedabad is Located on the banks of the river Sabarmati; the city was founded by Sultan Ahmad Shah in 1411. Today it is one of the fastest growing cities of India and is an immense repository of tradition, history & culture. Its famous walled area is one of the finest examples of community living & the city thrived as the textile capital & was nicknamed “Manchester of the East’ in 1888. This multicultural city is home to some of the finest Indo-Saracenic mosques & Jain temples.

The old city of Ahmedabad is dotted with labyrinthine by-lanes called ‘polls’. The exquisite carved wooden mansions and havelis are marvellous. The city also offers a rich architectural legacy that blends Hindu and Muslim schools of architecture, stone and brick with arches, domes and vaults, carved pillars, trefoil designs besides the modern buildings designed by the famous French architect, Le Corbusier and Louis Kahn.

On a quiet peaceful stretch of the Sabarmati River, Mahatma Gandhi set up a simple retreat in 1915. This was his Satyagrah Ashram and for many years it was the nerve centre of India’s freedom movement. It was from here, in 1930, that Mahatma began his famous Dandi March to the sea to protest against the Salt Tax imposed by the British. This is now known as the Gandhi Ashram. Hridaya Kunj, the simple cottage where he lived, is now a national monument and preserved as it was during the Mahatma’s life-time.

Sidi Sayed Mosque: One part of the wall in the old citadel of the mosque built by Ahmed Shah’s slave, Sidi Sayed, is celebrated the world over for its exquisite stone window tracery – a superb & peerless example of delicate carving that transforms stone into filigree.

Jumma Masjid: The Friday mosque was built by the city’s founder, Sultan Ahmed Shah, in 1423. Built of yellow sandstone in an architectural style that combines the best of Muslim & Hindu traditions. It stands on 260 pillars that support 15 domes at varying elevations.

Teen Darwaja: The triple-arched gateway was built by Sultan Ahmed Shah to serve as the royal entrance to the Maidan Shahi or the Royal Square. It is in an imposing monument of perfect proportions & highly ornate buttresses.

Hutheesingh Jain Temple: Built outside the Delhi Gate in 1850 by a rich Jain merchant, the Hutheesingh Temple is the best known of Ahmedabad’s many ornate Jain temples.

Adalaj Step-well: It is situated 17kms north of Ahmedabad. The step well at the village of Adalaj is another fine example of this magnificent architectural form. Adalaj Vav is richly carved, every pillar and wall surface covered with leaves and flowers, birds and fishes and friezes of ornamental designs.

Akshardham: Lord Swaminarayan, born in Chapaya in Uttar Pradesh, took a seven-year pilgrimage in Gujarat to preach his religion. He built six temples, the first being at Kalupur in Ahmedabad. Akshardham, the Swaminarayan temple of Gandhinagar, is a modern complex, built in traditional Indian architectural style from 6,000 metric tons of pink Rajasthan sandstone, carved by expert artisans from Bansipahadpur. The temple is set in a multi-acre garden called Sahajanand Van, with intricate sculptures of Hindu Gods. There is a gold leaf copper sculpture of Lord Swaminarayan. The interiors have beautiful columns in rosewood that rise up to a high dome. Akshardham remains closed on Mondays.

Did you find apk for android? You can find new Free Android Games and apps.

There are many variations of passages of available but majority have alteration in some by inject humour or random words. Lorem ipsum dolor sit amet, error insolens reprimique no quo, ea pri verterem phaedr vel ea iisque aliquam.

There are many variations of passages of available but majority have alteration in some by inject humour or random words. Lorem ipsum dolor sit amet, error insolens reprimique no quo, ea pri verterem phaedr vel ea iisque aliquam.

There are many variations of passages of available but majority have alteration in some by inject humour or random words. Lorem ipsum dolor sit amet, error insolens reprimique no quo, ea pri verterem phaedr vel ea iisque aliquam..